Waking your kids up needn’t see you go into their room and shout. Instead, get a smart speaker and music to do that job.

Getting the kids up and ready for school or daycare isn’t always going to be easy, because some times, sleep and the warm comforter are no match for the outside world.

Adults know the feeling all too well: sometimes, it just feels better to snuggle up and stay in bed. We’ve all been there.

But kids also typically can’t resist a good dance, to get that energy going and start jumping up and down with excitement and craziness. You don’t have to take part, but they might find the lure of music irresistible, kind of how the music of an old alarm clock can rustle you from your slumbers.

With kids, you might want to do something a little bit different, and while you can always give them a phone and speaker, you can also hide a speaker in their room and get it waking them up with a musical alarm.

So how do you do this: how can you turn a speaker into a musical alarm?

Making a musical alarm for kids (or anyone)

Smart speakers can be triggered with an alarm, but these aren’t really what we’re looking for. When you set up an alarm on a smart speaker, it’ll typically wait for someone to turn it off, either by touching it or calling out to it.

Instead, what we’re going to do is set up routines, either individually for each day of the week or just to fire on various days, and we can make them fun. 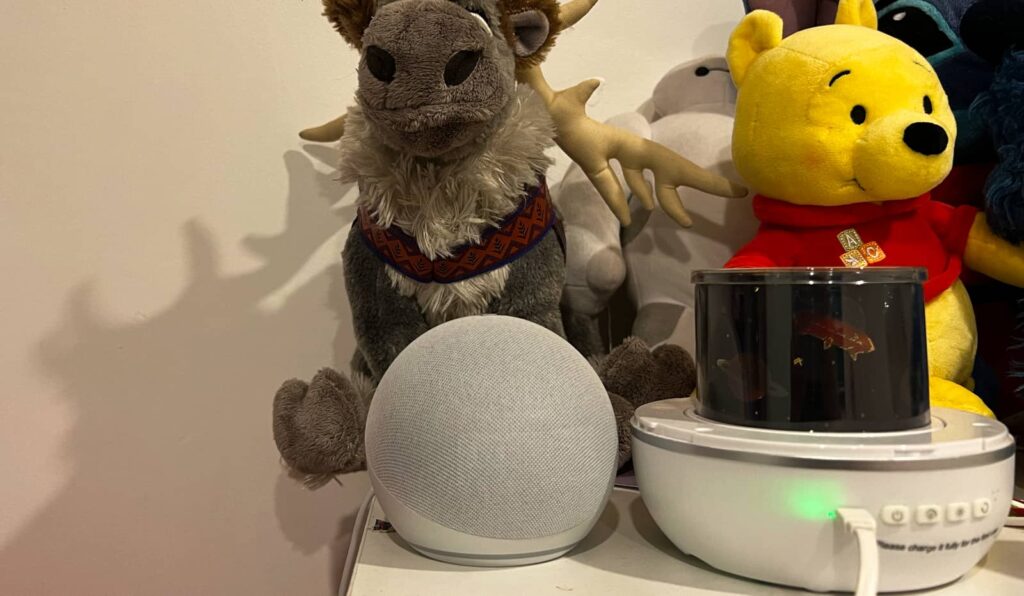 In this example, we’re using an Amazon Echo Dot, partly because it’s small, but also because it’s one of the least expensive of the smart speakers, able to be picked up for under $50 typically. There’s also the larger model in the standard Echo, which has better sound, but the Dot might be small enough to fit into a kid’s room without them realising it.

You’ll have to go through the regular setup and link it to your account, but once you’re ready, it’s time to create a routine.

For our musical alarm, we actually sort up some steps to make sure nothing was playing, and to make Alexa say some things. We had it stop the audio on the speaker in case anything was playing, we set the volume to three so it wouldn’t be too loud, and then we had Alexa say good morning, followed by some songs.

Depending on the music service you subscribe to, you may want to choose a station or playlist to run for 5 to 20 minutes, or you might pick a couple of songs, too. We chose different songs for each day, telling Alexa strictly what we would say.

It’s worth noting that you need to be pretty specific in how you trigger those songs, and if you don’t say the artist, expect any random song to be called up. If your kids want “Lead the Way” from the Disney film Raya, it’s “Lead the Way by Jhene Aiko”, otherwise you can expect Mariah Carey’s version to play. Be specific with song titles.

You might note that we’re pretty specific in our routines, and that’s because you’re ordering your smart speaker what to do. Set the volume, say something, set the volume again to account for music loudness, and then when you’re done, maybe say something again.

In essence, you’re making a custom alarm for your kids, or for anyone else. This is a musical alarm that can be entirely yours.

Your kids can learn to talk to a smart speaker

A smart speaker can bring other features to your kid’s room, such as being able to sing songs, say the weather, what day it is, what time it is, and depending on the services you subscribe to, even read a story.

It didn’t take all that long for the four year old in this writer’s life to work out how to speak to the Alexa, and we actually gave her a helping hand, changing the trigger word to “Echo”.

Since then, she’s worked out how to pace the words and ask her Echo to play certain songs, pausing the audio or controlling the volume using only commands.

You might want to curb use of that when they realise they can, and can throw in a do not disturb function to switch on from sunset to sunrise, providing some way to secure against misuse.

Mind you, it doesn’t just need to be kids that could benefit from a smart speaker alarm clock.

While adults might love the idea of a smart speaker that wakes you up with your favourite tunes, you could also use it to trigger soothing sounds as you go to bed, setting up relaxing soundtracks on a timer or to be activated by voice.

A smart speaker can also be controlled by touch, so if you’re inclined to grab a smart speaker, or even a smart display with sleep tracking like Google’s Nest Hub and place it next to the bedside, you could easily turn it into a sound-based alarm clock for adults.

Alternatively, you could torture an adult in your life.

A joke you can play on an adult with a smart speaker, consider creating a Groundhog Day routine that gets the smart speaker to repeat a line of the script after playing Sonny and Cher’s “I Got You, Babe”.

And then play it every day.

We won’t tell you when to stop, but they just might.