Apple’s Magic Keyboard for the iPad Pro brings the magic of typing to people who love a good keyboard to go. Now about the $499 price…

You don’t have to look far to find an iPad keyboard accessory, but they’re typically not created equal. Keyboards that clack and designs that add weight are common, but the consistent realisation is they don’t tend to feel just like a real a keyboard, or not like a real laptop keyboard, anyway. They’re getting better with each subsequent generation, sure, but they’re not the same.

But what if they were the same? What if someone made a keyboard just like a laptop’s keyboard, and threw in a trackpad to complete the picture?

Now that the iPad supports trackpad and wireless mouse support, the iPad Pro seems primed to take that approach to the next level, and has upgraded its Smart Keyboard Folio to something a little different. There’s a similar back and front cover design, a little more weight, and a totally redesigned approach to an iPad keyboard case.

What is the Magic Keyboard? 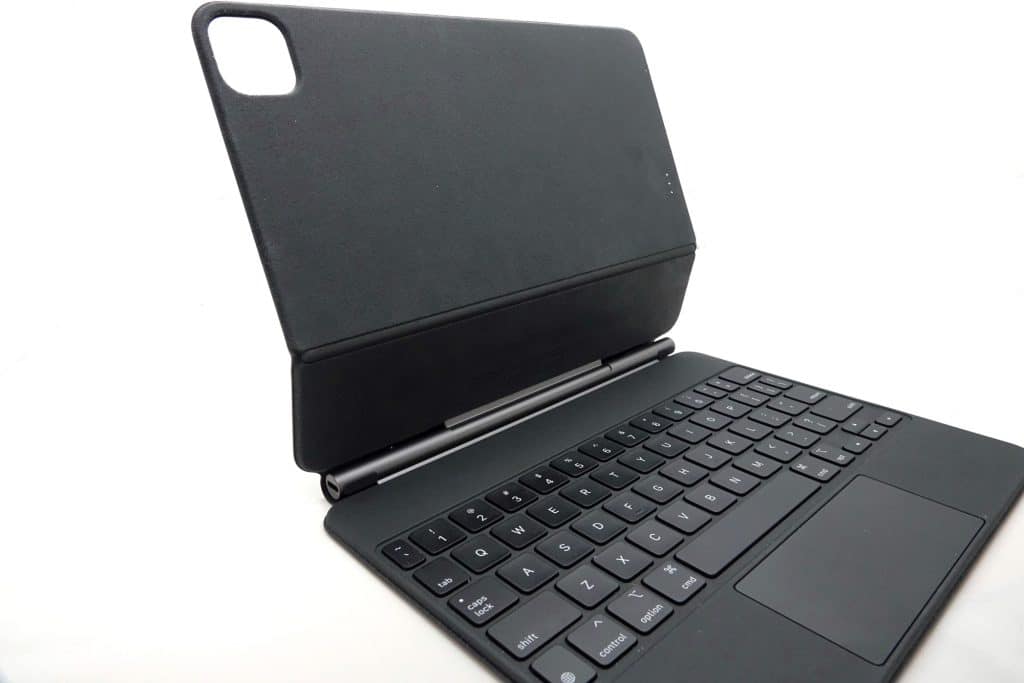 Apple’s second take on a keyboard accessory for its iPad Pro 11 and 12.9 inch models, it’s actually the first iPad Pro keyboard you’ll see from Apple with a proper mechanical keyboard.

While the iPad Pro isn’t a new range from Apple, all of its prior iPad keyboard accessories have been made of a flexible cloth material that you could wash, and provided a surprisingly capable typing experience in one of the thinnest form-factors around. It wasn’t altogether inexpensive, but it was a nice option for people who lived on their iPad Pro, and eventually made its way to the iPad Air and standard iPad.

The Magic Keyboard borrows from that, but changes the formula altogether. With a new scissor-switch keyboard on the MacBook Air for 2020, Apple is essentially taking the newly revised Air keyboard and plonking it in a special iPad Pro folio, which is what the Magic Keyboard for the iPad Pro is. 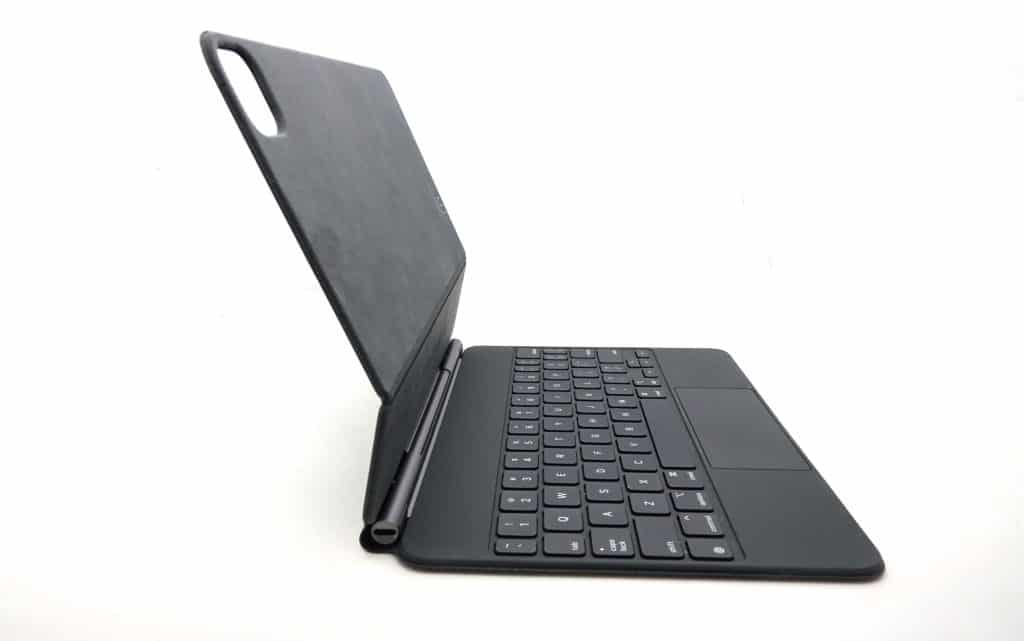 As such, you’ll find a keyboard here using the same slim but not perfectly flat scissor-switch mechanisms, sitting above a wide but slim trackpad, with the whole thing encased in a soft plastic folio that connects to the iPad Pro using magnets.

Aside for what is mostly a full keyboard, you get backlighting, plus an extra Type C USB port located on the left side, and because the Magic Keyboard connects to the iPad Pro by way of magnets, you never need to charge it.

There’s also a different way to hold the iPad Pro tablet up above the screen, with a floating cantilevered design, which is to say one part of the design holds most of the weight, which helps to allow the iPad to suspend over the keyboard, almost like it was an iMac screen over its stand.

What does the iPad Pro Magic Keyboard do?

Unsurprisingly, the Magic Keyboard for the iPad Pro is built for typing, and for using a mouse. In a way, it’s the gadget that can transform an iPad Pro into something more like a regular Mac, or one with a touchscreen anyway, which we suspect is kind of the point.

You can’t buy a Mac with a touchscreen. Not an official one, anyway. Yet with this keyboard accessory, Apple has essentially made a touchscreen MacBook Air, because you get the 11 or 12.9 inch iPad Pro screen, some high-end innards, and a MacBook Air keyboard and mouse down below. 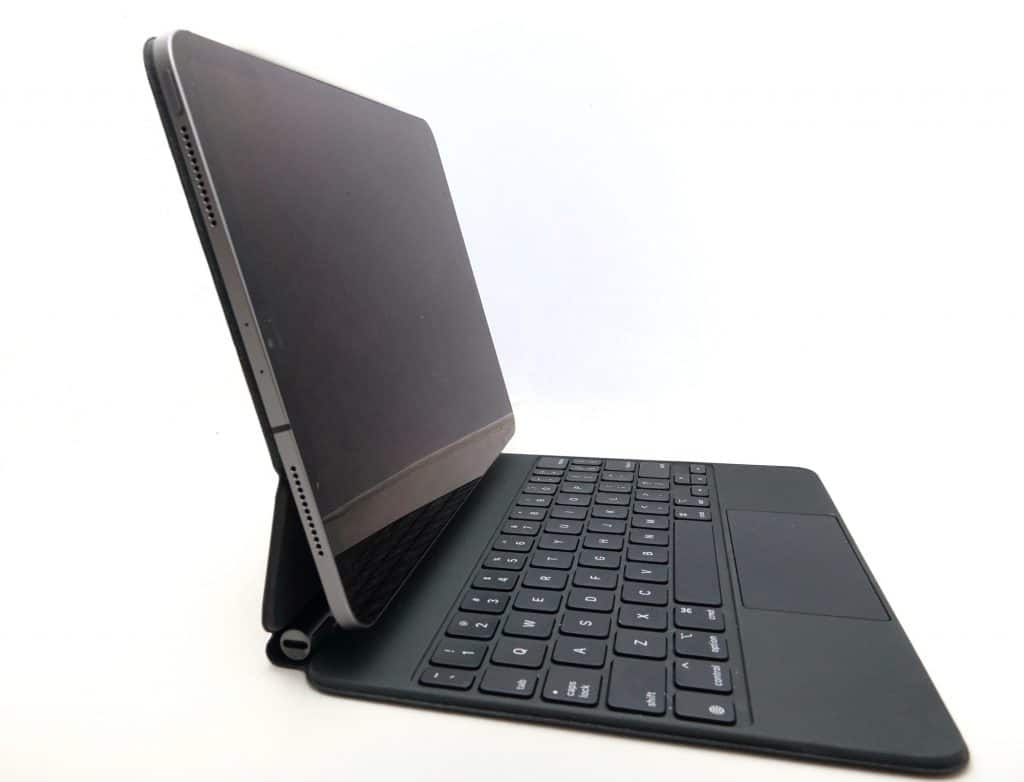 If you’re looking for a great keyboard, the iPad Pro Magic Keyboard definitely qualifies, offering much the same experience as Apple’s recent laptops, but for the iPad.

The typing experience is about the best we’ve tried on any iPad thus far, and while we’ve had some favourites over the years from all around the place, be it Logitech, Zagg, or Brydge, Apple seems to have perfected the formula in the Magic Keyboard. This accessory is comfortable to type on and offers more than enough travel to work with.

There are some great inclusions here, such as the backlighting, which provides a familiar level of backlighting for those keys as you type in the dark. It’s almost always active, mind you, and we spotted it working in daylight, too, though you can control it in the settings of iOS.

We wish there were function keys, as that would have completed the keyboard nicely, but will take the inverted T arrow key design, which is also something Apple has used on the new Air keyboard design.

The inclusion of an extra Type C port on the left side is also welcome, handy if you want to charge the iPad — because now you can charge it from either side — while it also means you can plug in one more device. Essentially, the Magic Keyboard for the iPad Pro brings the iPad Pro port selection up almost to the same level as the MacBook Air. All that we’re missing is the 3.5mm headset jack. 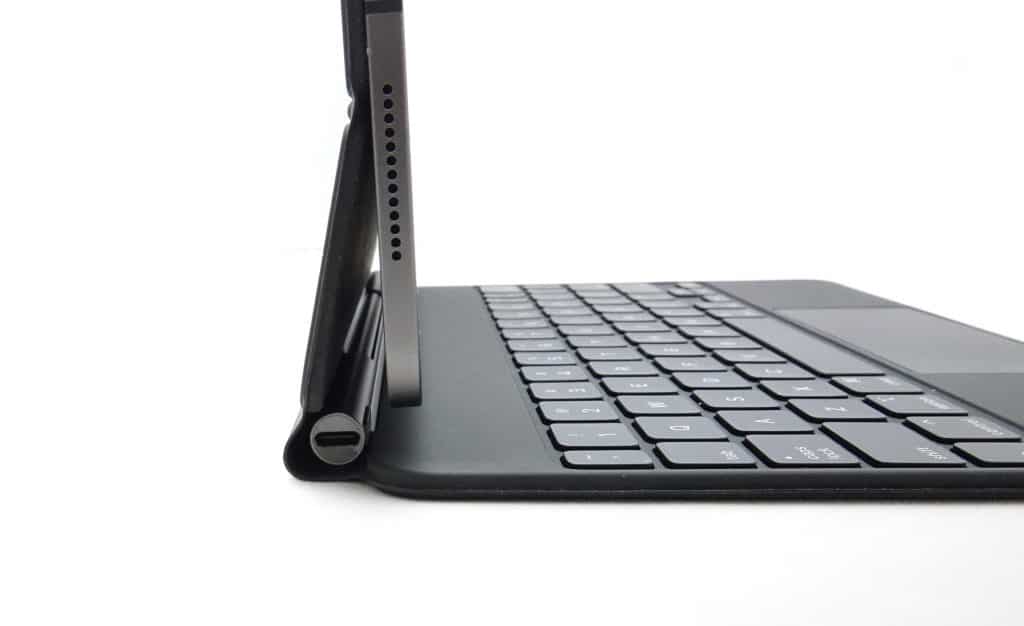 What does the Magic Keyboard for the iPad Pro need?

However it’s not perfect, and even has some reasons why we’d consider the flexible fabric over it, or even someone else’s accessory.

The single of the cover is very specific, too, and you can’t push it back to a specific point, so you’re basically stuck with the angles Apple gives you. It’ll never sit completely at a 90 degree perpendicular angle like a laptop, though you’ll probably find it doesn’t matter.

The iPad Pro screen will be angled slightly, and that’s how it works. It’s fine, but it’s not quite as magical as we’d hoped. 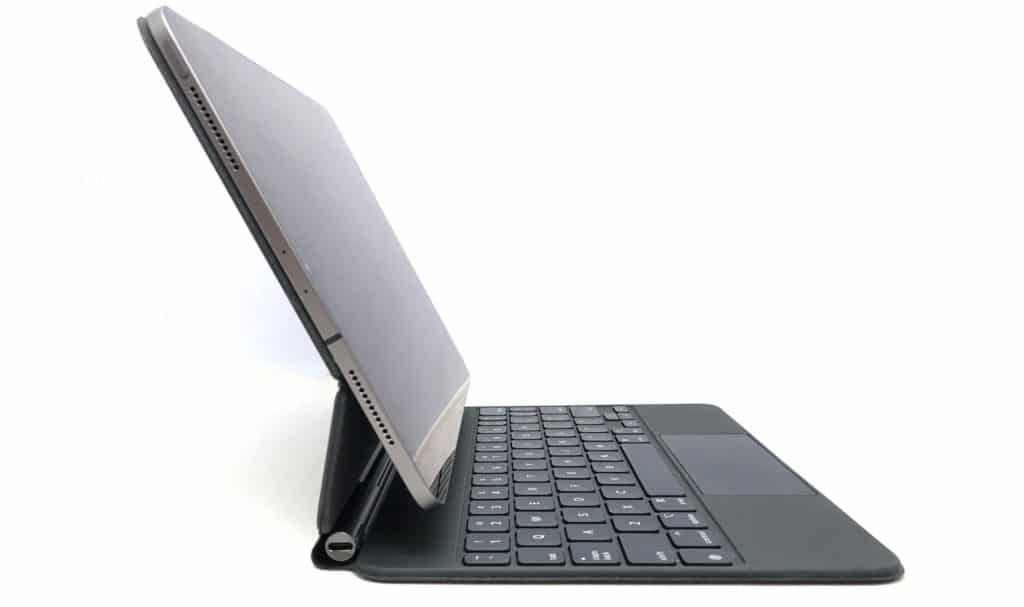 Next is that extra USB Type C port, which isn’t quite what you expect from it. While the Type C port on the iPad Pro can give you sound and data plus charging, the Magic Keyboard’s Type C port is just charging. It’s a minor thing, but it can feel pretty major knowing you can only use it for one thing and one thing alone.

The weight is also an issue, because it’s a surprisingly heavy keyboard accessory. While the Magic Keyboard isn’t as heavy as say the Brydge Pro, it’s also not light at all.

You’ll feel the heft almost immediately, and whereas the fabric Smart Keyboard Folio was barely noticeable on the design, this one makes an impact to the weight. Plus there’s only one colour: a dark grey that isn’t quite black, but that’s it, which is a similar problem to the Smart Keyboard cover.

Finally, there’s the price, because it almost definitely needs a lower cost. At $499 in Australia, this is not a cheap iPad accessory by a long shot. Granted, it is about the best iPad Pro keyboard, and one of the best iPad keyboards this reviewer has ever typed on, but it is genuinely expensive, and we’re not sure it’s necessarily warranted.

You’re technically getting a 2020-era MacBook Air keyboard on the iPad Pro, which also isn’t the same need as the MacBook Air. On the Air, Apple needed to return that scissor-switch keyboard because the butterfly mechanism of the air needed some work. But on the iPad Pro, the scissor switch mechanism isn’t quite as dire. The flexible keyboard is good enough, and there are third-party keyboards that are good enough, too.

Is the Magic Keyboard worth your money?

There’s no reason why Apple needs to have a $499 scissor-switch keyboard, even if it’s one of the best keyboards of the bunch. It didn’t need to release the MacBook Air keyboard for the iPad Pro, even if it did. For the price, you could still get a $299 Smart Keyboard Folio and any other wireless mouse for the iPad if you wanted to, saving money.

However if you love the Apple trackpad, the price is actually somehow valid that way, and here’s why: the $299 cost of the Smart Keyboard Folio and $179-219 cost of the spacious Magic Trackpad as an external mouse is already pretty much close (or more) to the $499 cost of the two combined.

Together at $499, it’s not horrific, but is still very expensive. Certainly no other iPad keyboard hits this price, even though the quality is very much up there.

There are downsides, though, such as the inability to wipe this keyboard down in quite the same way as the flexible Smart Keyboard Folio. You get backlighting and a great keyboard experience, but you also have to spend up to get it. 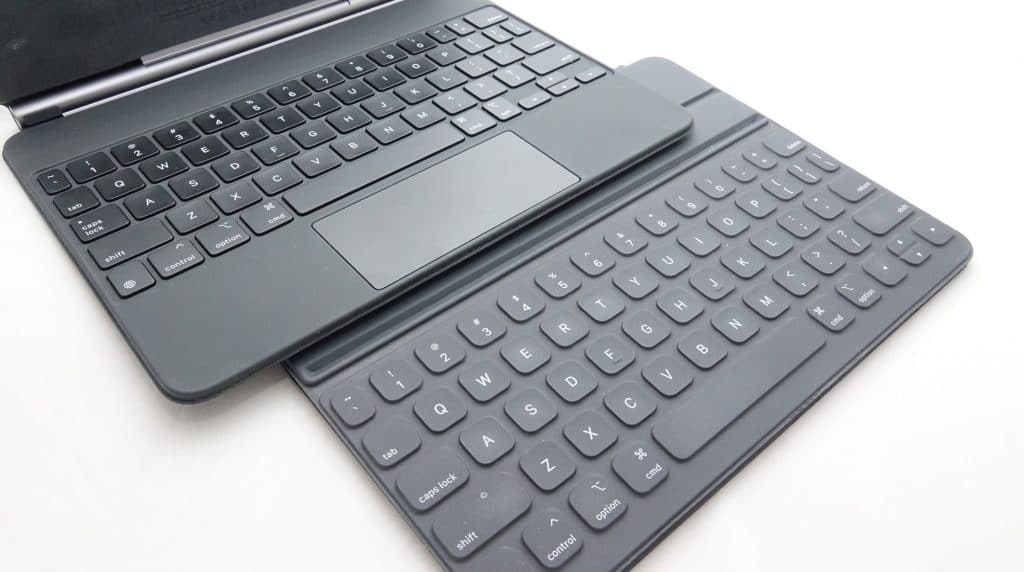 Mind you, there’s an argument that suggests Apple’s $499 Magic Keyboard for the iPad Pro is just right, though it may come down to what we accept for products. You may not like the cost of a $2300 phone, but there’s a good chance that you’ll be more than willing to swallow that for the iPhone 11 Pro Max than spend $500 on a keyboard. We all make certain allowances for what we deem is appropriate to spend on purchases, and in this case, it just might be a little more if you want a great keyboard for typing to go.

Folks who love to type on the go and love their iPad Pro will understand the importance of this, because this is just about the best keyboard your iPad Pro will see. Your fingers will love you for it. 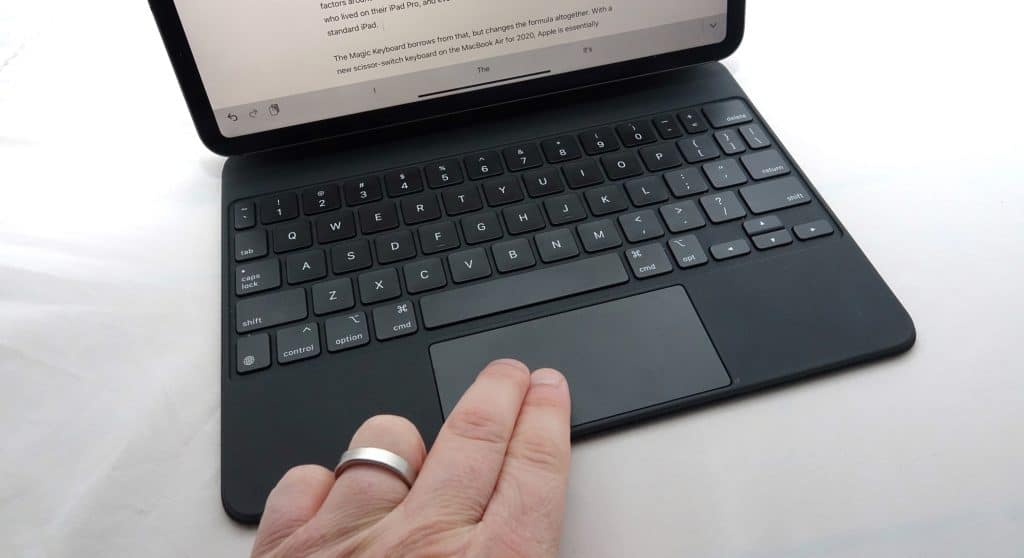 That’s really what it comes down to in the end, though. If you’re looking for about the best typing experience and aren’t afraid to spend, the Magic Keyboard for the iPad Pro is where you should be looking. It’s great typing at a cost, even if that cost can seem a touch prohibitive.

Frankly, we’d actually prefer a version that offered the same keyboard, but without the trackpad. We found our reliance on the trackpad wasn’t quite as often as we expected through the Magic Keyboard review, and so we were less worried about having that included in the design.

It’s possible that Apple will do this later on, and maybe switch up its Smart Keyboard Folio with a similar design, though right now, it’s a Magic Keyboard only kinda deal. We’re not sure we’d call it a “deal”, but if you’re good for the cost, the Magic Keyboard is a pretty great addition to an iPad Pro all the same. 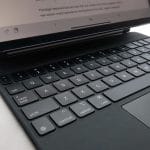